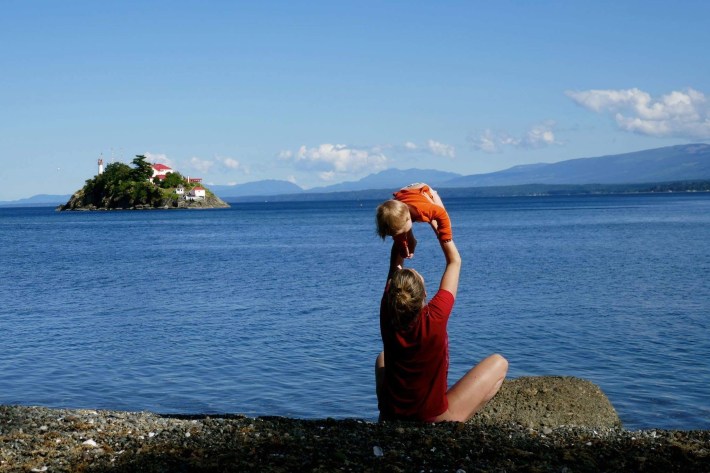 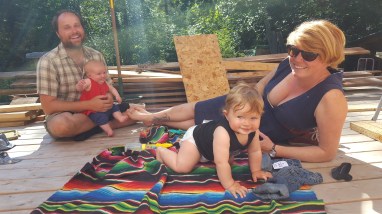 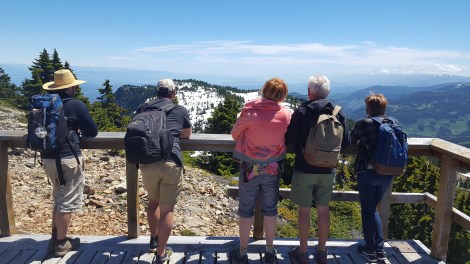 In June we’d clocked almost 6 months travel, 17 flights, four thousand miles of road and over a thousand nautical miles of marine highway. Then when you add in the legwork in those transit zones with cumbersome baby gear, the travel fatigue really set in. It was time to stop.

Lucky for us, I’d foreseen this possible scenario many moons before the trip began. Lucky for me, I had a fantastic friend living on her working farm in sweet little Denman Island, BC. And even luckier still, her sweet partner Jer had a wonderful mother who had a cabin in the woods out the back of her property… with nobody in it.

There was no real plan, but I’ve learned some people can create opportunity. Kerri works with such wizardry. Then one day, along came Goldilocks and her two bears. Like a fairy tale story, the tiny cabin in the woods ‘was just right’. From ferry to land, they stepped onto an island dream. And just like that, the Wittys became non-vagabonds for a month. 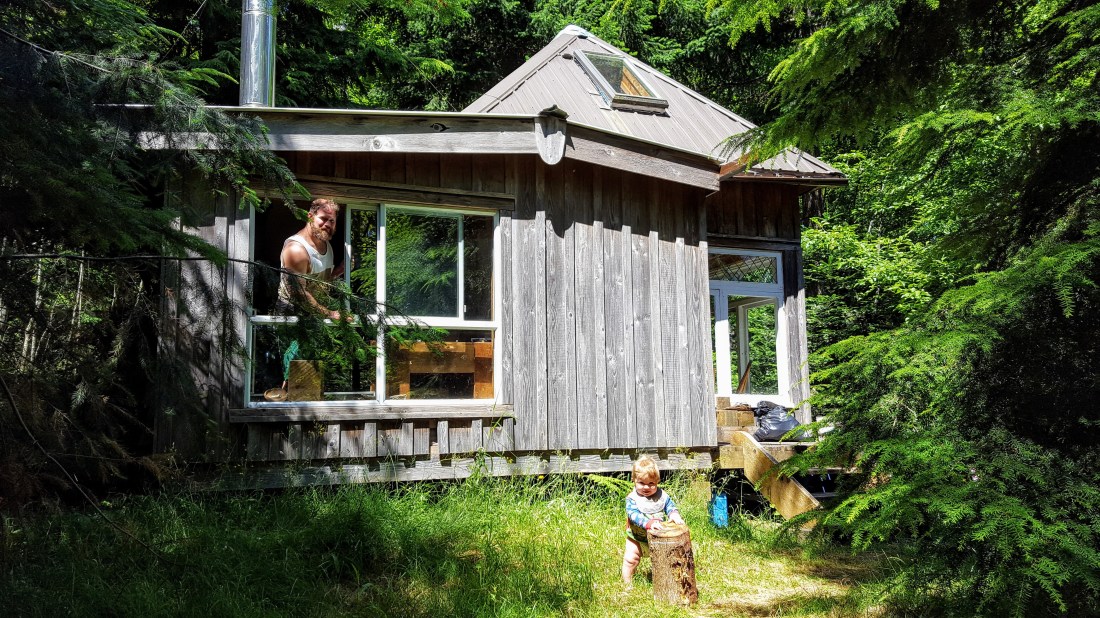 We feel so lucky to have had a home on this island. Locals often stop to chat and ask if we visiting or living. I’ve told them we’re ‘dream living’ for the month. It’s thanks to brilliant people like Jer, Ker and Jennifer, that planets seem to align and the universe seems to provide. In fact, there’s a mystical little universe story inside this one too.

You see, Kerri and I met about 9 years ago. In fact, I met her in the most unlikely spot you’d imagine. In Bolivia, in a tiny mountain town, at the tail end of a 10 day Vipassana meditation course. Vipassana itself doesn’t lend itself to meeting folk. It’s a course where you don’t look at anyone in the eye for 10 days, and you sure don’t get to talk to anyone! Yes…for 10 days.

Fortunately, at the end of the course they give you one day to start communicating again so you don’t get swept out the door of zen, step into the big wild world and come crashing down in a post naval-gazing heap. It was then, on the 11th day of this challenging experience, that I got to look around the group. I noticed a few other non-Bolivians in the course. That in itself seemed unlikely, as we were really off the beaten track. However, there were about 8 of us extranjeros in a sea of Bolivianos. One alabaster contender was a wild looking red-head with green eyes and a bright smile. I thought I’d better talk to her.

We got to chatting and it didn’t take long for me to learn Kerri was Canadian.
“Oh I used to live in Canada once,” I chimed in. “My mum did a teacher exchange in ’88 and we lived in Calgary for a year.”
Kerri looked impressed. “No way! I’m from Calgary. Do you remember where you lived?” she asked.
“No idea,” I  replied. “But I did go to a school with ‘King’ in it.. either Kingston primary or…”
“Kingsland??!” she interjected excitedly.
“Ah yes! That was it”!

Turns out Kerri and I were in the same grade, at the same school in 1988. Two six year old sprouts running around in the same playground. While she was in the French immersion class, I was in the English one! We might have met each other during a game of Red Rover but we will never know for sure. Still, with a meditated mind ripe and open, we were definitely tuning into the ‘planetary alignmentness’ of this moment! Pachamama. Universe. Talk to me baby! Astonished at the very least by this ‘coincidence’, we both agreed this was probably a good reason to stay in touch. So we did.

Many years later (after some wild family parties circa Calgary Stampede 2009 and many emails, postcards and Skype calls later), I learned I was pregnant. Knowing I’d always wanted to travel with my baby, I wrote to Kerri and told her we were finally hatching plans to come to Canada in some way, shape or form. I’d always wanted to live in Canada as a young adult. Now with a year’s maternity leave up my sleeve, surely we could find some time! Of course (thanks Universe) Kerri was pregnant too! Could you imagine our luck. Two gals with a year’s maternity leave, loose on Denman Island. Look out baby world!

Of course, it’s not that crazy. But this story, and this experience has some wild type of wonderful in it. I love the synergy of our situations in life. That I could come to visit my friend during this global adventure, and that we would both be new, nursing mothers. That we’d both have time work on her farm with Jer, or just play with the babies under the hazelnut trees. That we could plan it to happen in summer, when the island is bursting into bloom and the sun is calling us out to the beaches and lakes.

That it could happen in the middle of our trip when we’d most needed time to catch our breath and just ‘be’. You see, Denman Island has a lot to offer for a young family like ours. The great part is, it’s kind of a secret. People know about Vancouver Island. And Canadians sure know about Hornby, which goes from 500 people to 5000 strong in the summer.

But in between those two? On the ‘speedbump’? Well, you don’t know what’s there until you take some time to just be in it. That’s when the magic soaks in. I get a lump in my throat as I think about it, for we are literally packing our bags in between the moments I get to type today. We leave tomorrow, and how I’ll miss all this colour! 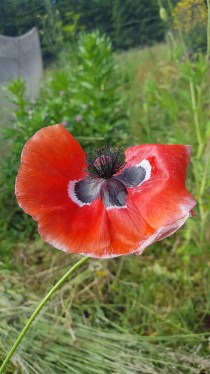 Thank you Denman Island, for your summer love! We’ve made beautiful friends on this island. Witty and all of his gang down at the Bistro, where he set up his office most days of the month. Impromptu sundowners with laid back locals down at the beach and hanging out with fun young families by the lake, eating hummus and nattering endlessly about our bouncing babies (because we all had one so we were free to binge on baby talk without driving anyone crazy). 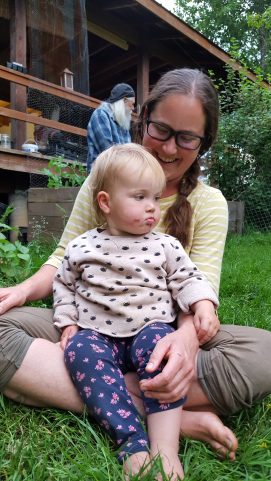 We’ve loved our visits to the other islands too, but Denman captured our hearts and our tummies. Collecting oysters off the rocks for afternoon treats! Meeting Jimmy the Vietnamese clam purveyor on low tide. Scoring a bag of clams to steam up and chow down with a sip of summer buzz. 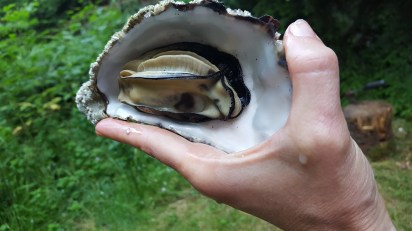 Even the cooler days on Denman were made toasty with a pot belly stove and a pot belly baby to cuddle. I had time to do things I never would have dreamed of doing on this trip. Making sauerkraut. Quilting. Who knew! I know we didn’t see the bitter truth of winter, but windswept walks along the coast were no worries when you could sport a new wind jacket, picked up at the Denman Island ‘free store’.

Market day on Saturdays were a delightful way to catch up with the people you’d met throughout the week. Taking in our goods to the pro-active recycling centre got me high on community spirit. Seeing Jer and Ker’s efforts come to fruition, from farm to market table, was a real and delicious delight. The Rhubarb Ranch is a young but fertile farm, sure to bear many bouquets and feed the friendly faces of Denmanites for years to come. 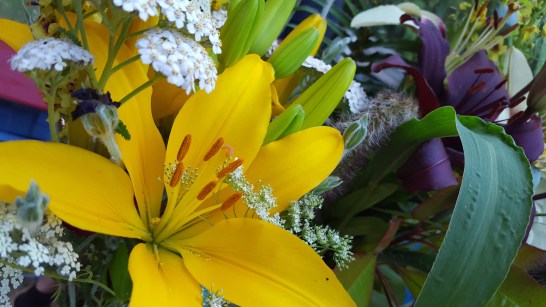 I’ll miss getting around on Jer’s bike. Kerri and I attached a baby trailer to it. I even took it on the ferry over to Hornby Island for the day to see our longtime family friends, Karl and Chri. I’ll miss feeling like an island neighbour to that gorgeous lot, and those beautiful beaches that, yes, I swam in!

I’ll miss a lot of things. The lifestyle, the people, Kerri and Jer’s families. But I’ll stop listing there as I can’t start all this longing too soon! This morning the Wittys took a walk on the beach. We agreed that we’d both love another month… maybe another one after that. But we have a plan and off we shall trot. On the world reconnaissance mission, we have found a beautiful secret here. It’s in the friendships. And it’s in the air. It’s Denman Island Dreaming.